Tips for using a Rice Cooker?

Suburbanbushbabe MassachusettsRegistered Users Posts: 15,402 Curl Neophyte
September 2009 in Recipes -- stuff to eat
I bought a rice cooker from Amazon, and I've never used one. I'm really excited to try it. I bought the Zojirushi 6 Cup Rice Cooker / Steamer. If you use a steamer, how do you use it - any tips? And do you recommend a particular cookbook?

I plan to cook brown rice and also try steelcut oatmeal and quinoa. And maybe something called farro that I get at Whole Foods salad bar but want to cook myself. 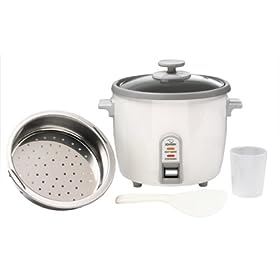 Playing with my hair is a hobby. Fluffy, fine natural 4a. Goal= Healthy, beautiful hair that retains its length.

Hear that crash? It's me falling off the CG wagon.