Growing out a tapered cut I hate... 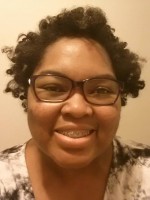 I’ve been growing out my tapered cut (4b/4c hair, possibly…) since October 2017, which was a month after my third big chop. I’m dealing with different issues connected to my negative perception of my hair (depression, self-hate, etc.), but in general, I just do not like the cut. Also, my father said that it looks like it was not cut properly and it looks uneven, even for a tapered cut. I know a part of the reason that it looks bad is because I have not had it trimmed since October 2017 out of fear of losing length, getting too much cut off, and my father sharing my fears. I know I’m an adult and that I should be able to make decisions on my own, but I live with my father and sister, I’m unemployed due to my mental health…and just a lot of indecisiveness about my life right now. Their opinion matters a lot. Though, I feel that doing a third big chop was needed to truly start learning how to accept my hair, I regret getting it cut so short and getting it tapered.

I’m debating on whether to get it cut even today or just get it shaped somehow. I wanted to go with braids, but I have fine-width hair, which could be harmed if hair extensions were added to get the bob box braids I wanted. I’ve tried wearing weave and wigs in the past and I just can’t do it…I want to feel authentic…but “my authentic appearance” looks hideous, in my eyes. I’m trying to stay away from getting it colored again, even though it did not damage my hair. I’m also trying to avoid getting it straightened/flat-ironed, or relaxed because it did damage my hair over the years. I’m sorry for just writing this long lament, complaint, or rumination…I just want to know if others have experienced this internal debate while growing out short hair (especially a haircut that turned out to be the wrong choice…:'( ).